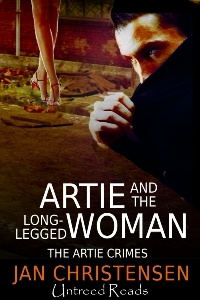 When Artie Applegate meets his friend’s mother after a long time with no contact, he recognizes Mrs. Henderson because of her incredible long legs. But Artie’s pleasure at seeing them–her–again is dashed when she insists he persuade her son to break up with his current girlfriend. If Artie doesn’t, then the video Mrs. Henderson captured of him burglarizing her jewelry store will end up at the police station.

With that threat hanging over his head, Artie sets out to become reacquainted with his old friend, Henry, meets Henry’s easily angered lover, and tries to figure out a way to break up the relationship. It will take all his professional skills and imagination to do so, and even then, things don’t turn out exactly as he envisioned. But Artie is used to that.

Excerpt from Artie and the Long-Legged Woman

Artie sighed. He closed the door quietly behind him and started to walk away. Maybe the woman belonging to the legs wouldn’t notice. Sure.

“Yes?” he said, feeling the sweat begin on his forehead, pretending he didn’t remember her.

“It’s been a long time. Let’s see. Maybe ten years. You were about twenty-two, and you and Henry were best friends.”

“Uh, yes, Mrs. Henderson. How are you? How is Henry?” He’d never forget those legs. Since he’d been fourteen and became friends with Henry, he’d known they were spectacular. He paled when he realized the name of the jewelry store he’d just robbed was, yes, Henderson’s Fine Jewelry. Rats. Henry’s parents hadn’t owned a jewelry store back then. It had been a dress shop.

I think I’m in love! Artie, why couldn’t you really exist, you conniving thief, you. Unfortunately, even if you were a real live person, I’m sure I wouldn’t fit the bill. No long legs here. Could I maybe win you over with a smile? I’d love to have those jewels you steal in my hands, even if just for a few minutes. I admit, I would be overly worried that you would get nicked by the po-po though. Now that would make for many a sleepless nights.

In case you couldn’t tell, Artie is a jewel thief. And maybe even a computer thief. And from what this short story tells us, he’s a damn good one. Even when he gets caught red-handed. Somehow or another he gets tangled up in the breaking up of a relationship. It’s his newest task and has no clue how he’s going to master this one. But true to his word, he pulls off his latest heist.

This short story was very amusing and was full of entertaining characters. Even the long-legged lady is a likable one, however brief her part in the story was. I admit, I never saw the ending coming. I don’t think Artie saw it coming either. I crave more Artie stories so it’s a good thing I have one more in reserve.

Artie is a professional thief who gets caught by the owner of the jewelry store he just robbed. Mrs. Henderson, owner of Henderson’s Fine Jewelry, had been alerted to someone being in her store. When she checked the monitor, she recognized Artie right away. She is the mother of an old friend of his. Her Henry and Artie went to college together.

Instead of turning him into the police, Mrs. Henderson has bigger plans for Artie. Henry is dating a married woman whose prominent husband is unaware of the romance. She wants the relationship broken up and thinks Artie is just the one to do it. If he accomplishes this mission, within a week, she will let him keep the jewelry he’s stolen. She’ll also give him the surveillance tape of him committing the crime.

Artie and the Long-Legged Woman by Jan Christensen is an enjoyable short story. I found it interesting that Artie was able to devise a plan to create a wedge between his old friend and the friend’s girlfriend within the time frame he was given. There are some unique twists toward the end of this story that make it well-worth reading.