EXCERPT FROM ORGANIZED TO DEATH

My novel, Organized to Death, is the first in the Tina Tales mystery series. Tina lives in Newport, Rhode Island, with her mother and great uncle in an old Victorian home. Her first job as a professional organizer goes horribly wrong when she and the home owner discover a dead body.

Here’s an excerpt from later in the book (on-line booksellers just give you the first few pages). I hope this will intrigue you enough to purchase or borrow the book, if you haven’t already. It’s available in print, for Kindle, as well as other ebook formats for your iPhone or Nook, Kobo, etc. Here goes: 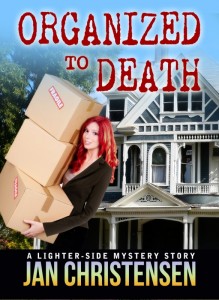 Tina grabbed her winter coat from the hall closet and stepped out the front door. A shadowy figure leaning against the old maple tree in the front yard straightened up as she approached. Hands in her jacket pockets, Tina’s grip on the pepper spray tightened. The urge to turn around and run back inside was strong, but she made herself keep walking.
“Hello, Tina,” the man said.
Gooseflesh rose on her arms. “Who are you?” she asked.
“Ted Hockmann.”
“Who?” Tina shivered in the cold night air.
“Ted Hockmann.” He stepped into the light, and she recognized Dr. Hockmann. He’d taken over old Dr. Stevenson’s practice a few months ago, and she’d gone to see him for her yearly exam. She blushed. She so did not want to talk to Dr. Hockmann.
“Oh, Doctor,” she said, realizing he’d called her by her first name. Since she’d become an adult, she didn’t like that. She admitted he was one of the most handsome men she’d ever met. Way over six feet, slim, and elegant with fine, chiseled features and piercing blue eyes. Blond hair. Yum. Except for some reason, he creeped her out. He stood there, not saying anything more. Her hand tightened on the pepper spray. Her mind told her she was being ridiculous, but all her mother’s past warnings clanged in her brain.
“Nice to see you,” he said, finally.
“Um, you too,” she squeaked.
“Going for a walk?”
“Yes.”
“Mind if I join you?”
Yes, her mind screamed. “No,” she said. “That would be fine.” He was a doctor after all. They knew each other, sort of.
They fell into step. “I live just two doors down from you, you know, in the conversion to condos,” he said.
“No, I didn’t know that.” Her voice was still too high.
“Yes. Just moved in a week ago. Do you often take walks at night?”
He’s just being friendly, she told herself. “Sometimes.”
“Interesting neighborhood. I hope eventually all the homes are renovated.”
“That would be nice.”
“Would increase the value, of course, but the main thing is how wonderful it would all look.”
“Yes.”
He was just being friendly, making conversation, she told herself again. They were neighbors, after all. They walked in silence for a while.
“You work?” he asked abruptly.
“Yes. I’m a professional organizer.”
“Really? What’s that?”
“I go to people’s homes or offices and help them clear out clutter and organize their space so they can put things away easily and find things when they need to, and just so it generally works better for them.” She was babbling. She hated feeling this nervous.
“You do offices?”
“Yes,” she said cautiously. He hadn’t been in practice long enough to need organizational help, had he?
“I could use your help then.”

And here’s the description:

Back in her hometown of Newport, RI, Tina Shaw, twenty-nine, is picking up the pieces of her shattered life. She begins her first job as a professional organizer in a house filled with cardboard boxes and clutter, only to discover a dead body in an eerily neat baby nursery. She fears this career move may be a short one until the handsome but spooky new doctor persuades her to reorganize his office left in disarray by the former physician. Ignoring the doctor’s obvious interest in her, Tina begins seeing her former boyfriend. When he protests against her new profession, she realizes what a control freak he is. Then there’s another old flame who is making her hotter by the minute. As she works through the office clutter, she learns the doctor has a possible motive for the killing. But when someone else is shot, the doctor has a solid alibi–Tina herself. Drawn unwillingly into the case, she searches for answers as her list of suspects multiplies. When the killer begins targeting Tina and her friends, she works harder to learn the murderer’s identity before someone else is found dead.